Title says it all - happy birthday 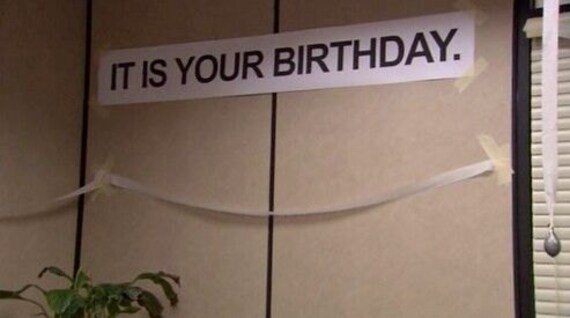 It's been great to see you posting here lately.

In Norwegian, how do you say "happy birthday"?

Well it’s not the literal translation “Glad bursdag”, so if you say that you’ll either get an awkward stare or a good laugh.

We most commonly use “Gratulerer med dagen” which literally means “Congratulations with the day.” Doesn’t sound too good in English.

For some informal variation you could use at own risk any of the ones provided below:

And wishes for many more happy years of leaving a swath of destruction in your wake!

Have a great day !

thank you so much everyone

Had a great day, got a package from my mom with lots of moomin stuff <3 other than that i am writing an exam paper, but still got a little partying yesterday

Glad to hear you had a good day.

Good luck on the paper!

kinda stuck at the moment, that's why i am back here procrastinating.. also i ate to much dinner and now i am sleepy but i have like 600 more words to write ..

Can I just say Norc...I love your new forum Avatar

Thank you. She is called Chase No Face. She was run over by a truck as a kitten, but lives a pretty good kitten-life now (she is somewhat of a youtube star).


I was so certain that cat was photo-shopped...
_________________
"'But whereas we have drunk with thee, who seemest to be a man of lineage, and thou hast been blithe with us, we will tell thee that we have seen one riding south along the Greenway, clad in a coat as green as the way, with the leafless tree done on his breast. So nigh to him we were that we heard his cry as he sped along, as ye may hear the lapwing whining, for he said: "POINT AND EDGE, POINT AND EDGE! THE RED WATER AMIDST OF THE HILLS!" In my lifetime such a man hath, to my knowledge, been seen thrice before; and after each sight of him followed evil days and the death of men.'"

I thought it was a furby at first glance.

{{Happy Birthday Norc- and your weird faceless cat too!!

Hoe you had a great day, report writing not withstanding (how do you write drunk? and if you're not drunk- why not? Its your birthday!)

Eldorion wrote:I thought it was a furby at first glance.