yepp... books are more exiting, though it is fun to read like McGonagal's history.

I thought there might be music and you could move around more inside places like Diagon Alley, but I guess you need video games for that? or a Holodeck.

I'de go for the last one.

Mrs Figg wrote:I thought there might be music and you could move around more inside places like Diagon Alley, but I guess you need video games for that? or a Holodeck.

Or find a wormhole to an alternate universe where Harry Potter actually exists.

The best video game for that is HP: OOTP, closest you'll ever get for that kinda of thing. Haven't done much on Pottermore since I managed to sneak up for beta, I was kinda annoyed at the username options they gave me! I'm mistyfeather134, possibly the worst username I've ever had

Mrs Figg wrote:I bet they didnt put you in Slytherin though? that still cheeses me off.
I am Shieldecho23992, not bad I suppose?

Not bad, better than 'Misty Feather' at any rate

I was sorted into Ravenclaw if my memory serves right. I'm considering going back and putting a bit more thought into my answers to see if that would make a difference to where I'm sorted

Sounds pretty right to me....

Stephen Fry: Can we settle an important question? How do you pronounce your last name?
JK Rowling: It is Row-ling. As in rolling pin. (mimics rolling action)
Stephen Fry: So if any of you hear someone pronounce her name "Rohw-ling", you have my permission to hit them over the head with -- not with Order of the Phoenix, that would be cruel. Something smaller, like a fridge.

My binding was in tatters when I had finished- that was her first stonker book too- it's like she forgot she was writing a children's book! and the comments on tumblr:
(photo is from Harry Potter wiki)

I am ashamed I never thought about this before. His name would have to change for different languages.

Will forever love that Norwegian just went fuck it and changed the meaning more than anyone else. But “Jeg er Lord Voldemort” just doesn’t anagram well.

MUGGLES WILL BOW BEFORE THE HORROR THAT IS MARK NEELSTIN

Did anyone notice the Czech translation is “Me Voldemort.”

THIS IS SO FUCKING FUNNY

I can't get over the french, ELVIS!

Dunno about most of it but the 'sex' written on the wall is pretty blatant! Not being a Potter fan at all can someone confirm if this is in the actual film or has some rogue added it later?
_________________
Pure Publications, The Tower of Lore and the Former Admin's Office are Reasonably Proud to Present-

I'm getting strange conspiracy theory vibes from that video. I'd love to know what the person who made thinks Hollywood is really up to with their "neuro-linguistic programming". Actually, on second thought, no I don't. I get enough of that when GB is here (I say that with love, Old Beard!

As for the word sex in the background, I think that in some cases it's just people reading too much into random squiggles and in others it's a joke by the production team. The same thing happened with The Lion King, though Disney tried to say it actually spelled "SFX". Then again, given the rest of Half-Blood Prince, it might have been a deliberate thematic nod. 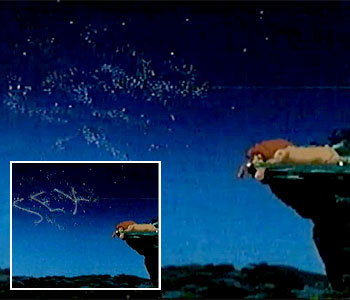 Or maybe I've already succumbed and am now just making excuses for our godless Hollywood overlords.